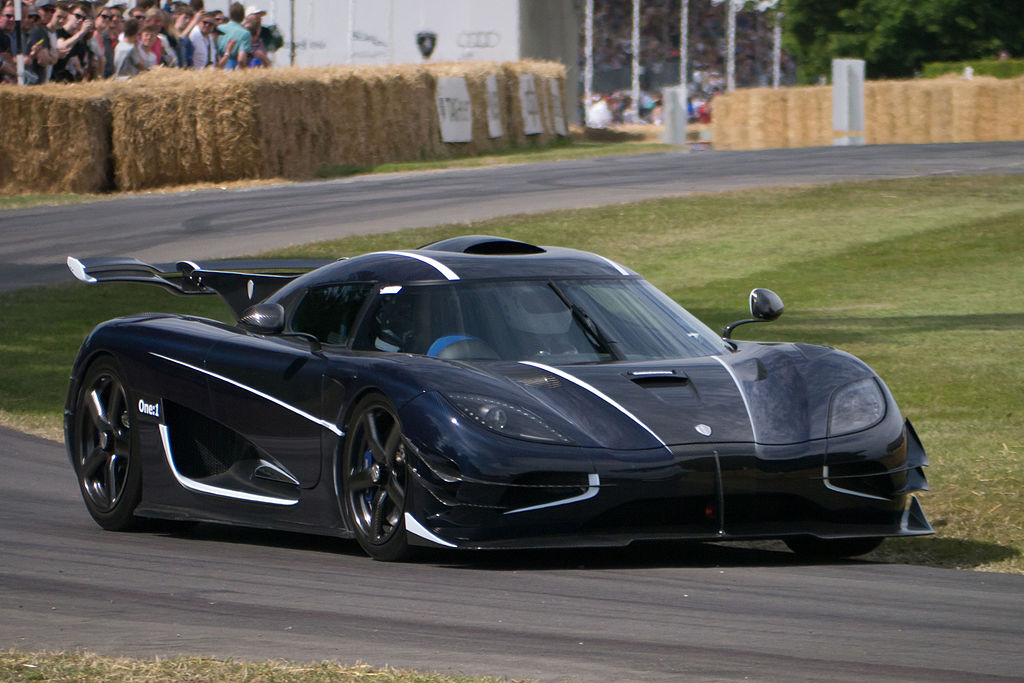 The Koenigsegg One:1 at the Goodwood Festival of Speed
The Koenigsegg One:1 was presented at the March 2014 Geneva Motor Show.[21] Koenigsegg built six cars apart from the car presented at the Geneva Motor Show. All of which were already sold. Koenigsegg took two cars to the 2014 Goodwood Festival of Speed, where they were displayed alongside other hypercars such as the McLaren P1, the Ferrari LaFerrari, the Porsche 918 Spyder and the Pagani Huayra.

The name One:1 comes from the power-to-weight ratio (1,360 PS to 1360 kg) giving the car 1 PS per 1 kg weight. The 1,360 PS power output is the equivalent of one megawatt, which Koenigsegg claims makes the One:1 the 'world's first megacar'. The car is track focused as opposed to the previous cars made by Koenigsegg. Koenigsegg had to sacrifice a few things to be able to achieve their goal with the car. There is an airscoop on the removable roof and an extra set of radiators in the front compartment, so it would not have been possible to stow the roof in the boot like previous models. As such, Koenigsegg have taken advantage of this and modeled the front to create more downforce, which reduces boot capacity by 40%.
- October 17, 2018

Email ThisBlogThis!Share to TwitterShare to FacebookShare to Pinterest
Labels: Koenigsegg